Looking back at my growing up years, I can see why I may have been confused about many things. We were the type of family that went to Mexico for the winter, and came here, to Ontario, for the summer.

In Mexico we went to school where we learned to read and write High German and learned to say the Katachism from memory. The general behaviour and way of living was vastly different from Ontario.

In Ontario we worked on the fields wearing the type of clothing everyone else wore for work, which was pants with a cap. Our hair was also styled and cut to fit in with those around us. We normally had a TV int he house, which was so different from Mexico where it would have been viewed as a sin. (I think it was here too, but maybe too available to resist) I remember there were Sunday's when we came home from church and my dad would throw the TV out because of the conviction; only to come home with another one a few weeks later. When the summer would drag into fall we had to attend public school. We were always allowed to wear pants; One day I remember asking my mom if it was OK if I wore a dress that day, She said yes, as long as it wasn't a gym day. In Mexico this was a big "No No". Everyone wore homemade dresses, head coverings (even the young girls), and a woven hat with a wide ribbon on it for decoration.

When you graduated from school at age 12-13 you were considered youth and be allowed to walk around on the village roads on weekends drinking and getting drunk. The boys would often chase the girls, who would runaway shrieking and laughing. Those who were old enough to drive, would come to the end of the village road (where we lived), and since it was a dirt and gravel road the would do multiple donuts and send dust flying everywhere. It terrified me to think of walking in the middle of the road (which is obviously the only place to walk when you're that old and cool) and possibly getting hit by one of those drunk drivers!

Thankfully when I was around 12 years old my parents decided to buy a farm here in Ontario and settle down. Interestingly enough, after we moved my mom got more strict with our appearance. We were now attending a Christian School, we looked a lot more ancient than basically everyone there And on top of that all I was 2 grades behind every one else my age. Being a new student I felt very insecure. This is the where I met the first Christian that I was ever aware of. My grade 5 teacher always had meaningful devotions with us and I learned many things from the Bible that year. Saying that, I wasn't the smartest of the bunch because of us having gone to Mexico and back all the time. I stated in grade 4 but was always kind of struggling to pass to the next grade. After finishing grade 6 my parents wanted to pull me out of school, I begged to stay for at least one more year which they finally agreed to. After I completed grade 7 I started work; but now I had friends who respected me  and we hung out on weekends.

For a few years nothing special happened, until one day my friend told me she had gotten invited to join a choir where they played instruments and sang christian songs; everyone was welcome. I talked to my mom about it, her warning bells were sounding and she forbid me to go. I kind of listened... If there was ever an opportunity to join some of the different things my friends were allowed to go to; without my mom finding out I would go too.

After some of my friends were converted (the ones that I was no longer allowed to socialize with) I knew enough know I needed something more than what I had. Lying in bed one night I asked Jesus to come into my heart, and.... nothing. I didn't feel any different than before. How could this be?? I was supposed to feel overwhelming joy... right? Or SOMETHING anyways. The next night I decided to try again. I must have done something wrong. I prayed for Jesus to gibe me some kind of sign to show me that I was saved and that He accepted me. And again, nothing. The third night rolls around and I cried out to God and asked Him to save me and to show me if I am born again (starting with a very weak faith) and He answered! He gave me a wonderful sensation that deeply warmed my body and soul. I felt complete Joy and acceptance. I knew I was saved! It was the best day of my life! Now I understood who I was and that Christ identified me as His child. I believe God gave me a sign because I didn't have anyone in my life at that time I could ask about it. Reading Scripture made so much sense now, I could hardly stop reading. I felt like everything was speaking to me in a way that it never had before. I always read out duty before, but I loved reading it now. I was saved. Praise God!

"Therefore if any man be in Christ, he is a new creature: old things are passed away; behold, all things are become new."
2 Corinthians 5:17

"But we all, with open face beholding as in a glass the glory of the Lord, are changed into the same image from glory to glory, even as by the Spirit of the Lord."
2 Corinthians 3:18

"And that ye put on the new man, which after God is created in righteousness and true holiness."

"And have put on the new man, which is renewed in knowledge after the image of him that created him:"
Colossians 3:10 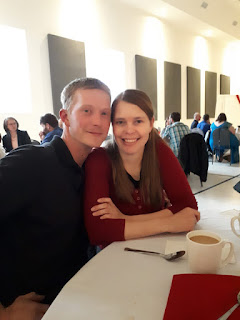 This is my story

Preparing for the next season is something I enjoy. I like to think of how blessed we are, that we can enjoy 4 seasons in one year. Each one of them is so beautiful in their own way. Such variety, such beauty, and the sights and smells are so unique in their own time. Right now I'd like to just briefly share how I like to prepare for winter before it gets here.  "She is not afraid of the snow for her household:  for all her household are clothed with scarlet." Proverbs 31:  21 First of all, it's important to prepare myself, because so much of life is a matter of mind set. I need to think of ways to make beautiful memories during the cold and cloudy season of winter. Not that it's always that way, because there are also beautiful sunny days where the ice and snow make such neat patterns on the windows. The trees are so laden with ice. If we just take time to look around, winter is beautiful. I need to have that mind set. To prepare projects,
Read more